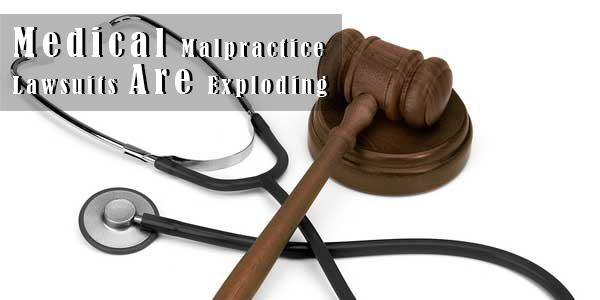 The two words that strike fear in the minds of doctors and hospital administrators are “medical malpractice.” The word on the street is, money hungry lawyers and patients who are not happy with the results of a medical treatment are suing doctors at an alarming rate. Young doctors pay high premiums for malpractice insurance, and in many cases, juries award plaintiffs incredible sums of money. Many of these jury awards have no merit, but insurance companies must pay to get out from under the civil justice system. Medical malpractice suits are a sick, one-sided game where doctors and insurance companies lose, and justice is not in the outcome, according to many insurance companies that get stuck in the middle of this legal battle.
But there is a deeper issue that must come to the surface when a medical malpractice suit is on the table. The issue is, there is too much medical malpractice, not too many malpractice suits. Every year medical malpractice hurts more people than auto accidents and on-the-job accidents. And every year, thousands of people are medical malpractice victims, and most of those victims never sue doctors or the hospitals, according to a California Hospital and Medical Association study. The 1970s study didn’t get much press because it was too technical, and they were no credible findings in the report. So, the myth about too many malpractice suits continues to be the truth that everyone believes.
Medical malpractice insurance premiums hit a record high in the 1980s, and so did malpractice suits, so tort reform legislation was the answer. Limits on the amount of a payout in some malpractice cases were the norm. And in 2002, more tort remedies, especially in California and other states gave doctors, insurance companies, and hospitals more help in certain malpractice cases. Attorneys who handle birth injuries and other issues like Cohen, Placitella & Roth realize the challenges they face when they sue insurance companies, hospitals, and doctors. But they also understand that they only represent a small number of people who are victims of birth injuries that result from medical malpractice. The attorneys who work with Cohen, Placitella & Roth learn more about medical procedures every day, and they base their cases on credible medical reports and other information.
A recent California study shows the actual cost of medical malpractice is job loss, extra medical expenses, pain and suffering, and the loss of life. And many people who experience one or more of those issues never sue. Some people sue to find out why they got inferior or the wrong medical treatment because that is the only way they can get the truth.
Most frivolous claims disappear before a trial. And most claims end in favor of hospitals and doctors. Doctors never pay a claim, and hospitals and insurance companies refuse to pay unless the evidence to support the claim is airtight. People who fake claims rarely win malpractice lawsuits. The people who do suffer from malpractice are the victims, not the cause of high malpractice cases or payouts.